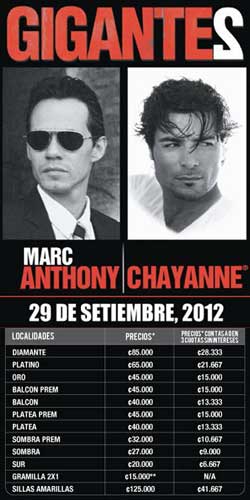 Get ready for GIGANTE2! Two amazing giants of Spanish music, Marc Anthony and Chayanne, will treat Costa Rica to a much anticipated live performance at the Estadio Nacional on September 29th, 2012. There is obviously a large fan base here in Costa Rica for both these stars as each of them have held two successful performances within the past two years.

The September concert, which has been aptly named ‘Gigante2’, recognizes the importance of these two Spanish singers within the global and Latin music scene.

The concert was announced in last week and all ready there is a whirlwind of excitement surrounding the upcoming performance of these idols.The concert will be presented in a full stadium format using the same production company who is responsible for assembling this same show in four other countries, including Panama and Venezuela. The concert will last about 3 hours, kicking off at 8pm.

To up the anti, there is a third performer that will join the pair. The third artist, who has already confirmed their participation, will be announced shortly. So concert goers will get the experience of watching a performance from 3 major renowned artists all in one sitting.

A Costa Rican National artist will also be in the lineup, however the artist or group has not been selected yet, and will be announced soon.