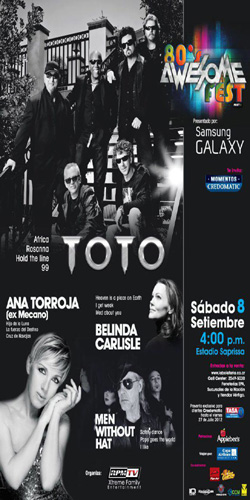 Well if you ever wish you grew up in the 80’s… you will have one night to experience (or re-live) those good old days. Samsung presents Costa Rica with a blast from the 80’s with the 80’s AWESOME FEST!

The organizers for this concert have put together an 80’s power line up including some of the most renowned 80’s bands featuring Toto, Belinda Carlisle, Men With Hats, and Anna Torroja

• Toto!!! (USA) If you have never heard of Toto, then you have definitely been under a rock for the last 30 years… Toto formed in 1976 and is most recognized for its hit tracks “Hold the Line”, “Rosanna”, “Africa” and “Georgy Porgy”.

• Belinda Carlisle is an American artist who received her first fame as a member of the Go-Go’s, an all-female band that topped the charts and went on to sell over 7 million records. After the Gogo’s, Belinda went solo and produced several 80’s hits including “Mad About You”, “Summer Rain”, “I Get Weak”, “Circle in the Sand”, “Leave a Light On” and “Heaven Is a Place on Earth”.

• Men Without Hats was a Canadian New Wave group from Montreal, Quebec. Men Without Hats had a uniquely distinctive sound with the baritone voice of their lead singer Ivan Doroschuk. The band produced number one hits such as “The Safety Dance” and “Pop Goes the World”.

• Ana Torroja is a Grammy Award-nominated Spanish singer. Her biggest solo success came in 1999 with her album, Pasajes de un Sueño (Passages of a dream).

Tickets can be purchased at www.laboleteria.co.cr