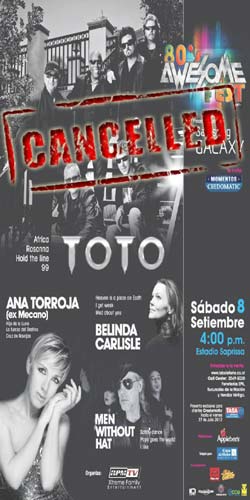 After this morning’s earthquake that hit Costa Rica and shook San José with strong force, it has been reported that the facilities at Estadio Ricardo Saprissa are not safe enough to facilitate the concert. Concert promoters have released news that the concert is now been officially cancelled.

There is no mention if the concert will be re-scheduled. Puravida Guide will keep you informed if the organizers schedule a new date for this concert. It is really unfortunate as Costa Rica was starting to buzz with excitement for this 80’s Festival.

GETTING YOU MONEY REFUNDED:

• Customers who bought with CREDOMATIC be doing them automatically reinstated
• Customers of other banks should do chargeback management
• Cash customers must wait for the producer directed RPMTV
• Public bought at resale, there is no means of recovering the money.