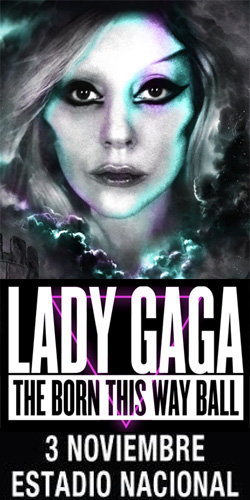 The wait and uncertainty is finally over for all those Lady Gaga fans in Costa Rica. It is now confirmed that Lady Gaga will visit Costa Rica to perform in concert at the National Stadium on November 3rd, 2012. The concerts is expected to be one of the largest concerts in the history of Costa Rica!

The announcement is in addition to the other tour dates that have been released for Mexico, Puerto Rico, Brazil, Argentina and Chile.

Lady Gaga’s “The Born This Way Ball” concert tour started in South Korea last April. The tour has not been without its controversy, targeted by protests from groups that believe Lady Gaga concerts push the boundaries on conservative religious values.

Lady Gaga’s concert in Costa Rica will be the only show held in Central America, so it is expected that many fans will be coming to Costa Rica to attend the concert from other Central American countries. This also means that there will be a large demand for tickets.

The first tickets can be purchased by Credomatic cardholders, who have access to a pre-sale. The pre-sale begins this Friday August 17th at 12:01am to Sunday August 19 at 3pm.

General ticket sales will commence August 20 at 10am.

Lady Gaga will be accompanied in her concert by the British rock band, The Darkness as well as Dj Lady Starlight.

The Lady Gaga world tour promotes her latest album, “Born This Way” that was released in 2011.