Shockingly in a recent report by the Institute for Economics and Peace, the majority of countries around the globe are at war.  The Global Peace Index 2016 confirms that Costa Rica is only 1 of the 10 nations remaining, completely free from any conflict.

The nine other countries at peace and free from war are: Vietnam, Switzerland, Uruguay, Botswana, Chile, Japan, Mauritius, Panama and Qatar.

Most disturbingly, the world as we know it today, is in a far less peaceful state than ever before.  With an inconceivable 13.3% of the planets economical resources, that´s $13.6 trillion, being spent on militarism and violence.  That´s the equivalent of $1,876 for every person in the world.

TERRORISM AT AN ALL-TIME HIGH

Whilst war rages on, the greatest deterioration of the world today is the impact of terrorism and even though it still accounts for a small percentage of the total number of violent deaths, it has grown steadily over the past decade.  Since 2011, the number of deaths related to terrorism has tripled to over 30,000 with the majority of activity concentrated in five countries: Iraq, Nigeria, Afghanistan, Pakistan and Syria.  Between them, these countries accounted for 78 per cent of deaths from terrorism in 2014, however globally, almost every region across the world shows signs that it is becoming more and more common.

GIVE PEACE A CHANCE: From the Global Peace Index

“The study of what creates peace can be advanced through the concept of Positive Peace, which represents “the attitudes, institutions and structures which sustain peace”. At the heart of the research of the GPI is the goal to understand what creates Positive Peace. But understanding why some countries are peaceful and others are not, is profoundly complex. In order to understand the complexity of peace, this year’s report presents systems thinking as it has developed in biology and ecology and applies it to the study of peace”. 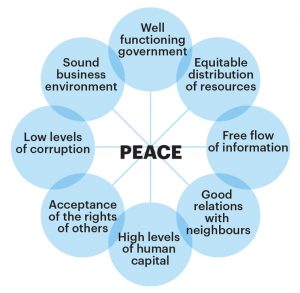 5 TELL-TALE SIGNS YOU ARE OVER-DUE FOR A HOLIDAY!