As El Niño fuels droughts, the phenomenon of La Niña, already approaching Costa Rica, will end the dry spell of the last two years.  Due to reach our shores by August, the IMN  calls for the public to take the necessary precautions to avoid flooding once the storms arrive.

Whist El Niño brings high temperatures and droughts and has been present in Costa Rica since 2014, La Niña reverses the climate with increased rainfall, thunder and flash-flooding.

Although Costa Rica is now desperate for a solid rainy season with a 40% deficit during May and June, all is not good news.  La Niña increases the risk of intense storms and aside from the relief for many farmers who have struggled for the lack of rainfall, the ferocity can have devastating effects to property, structures, wildlife and public safety.  It is advisable now, for communities to make repairs to all guttering, drainpipes and roofs to prepare for La Niña´s unpredictability as it rages forward in the next few weeks. 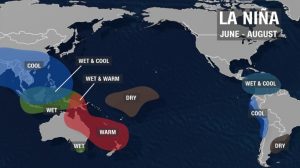