Exciting football for the fans of Costa Rica´s “La Sele” as they commence their battle this Saturday against Paraguay in the Copa América Tournament.  Sports Presenter, Natalie Van Rydstrom discusses what we can expect from the 24 matches beginning tomorrow, with Football expert, Jamie James (JJ) predicting the next 3 weeks performances will be “a gift from the Gods”!   With 16 teams of “World Class Players”, James believes this tournament will be “more technical than the European Games” with plenty of drama and tactful play.

Is Costa Rica in with a chance?  Who knows says JJ but “anything can happen”? 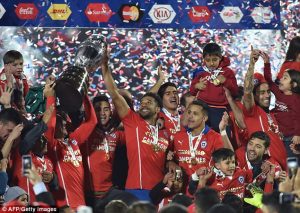 Copa American champions 2015:  Chile celebrating their victory….. but who will win the trophy this year….go Costa Rica!

Main photo: Real Madrid’s sensational goalkeeper Keylor Navas will be crucial if Costa Rica are to have success