Due to the recent heavy rainfall which is expected to continue throughout the next few months, the National Roadway Council (CONAVI) have announced possible nightly closures of Route 32, the main road to Costa Rica´s Caribbean.  The highway is the most affected during rainy season (May-November) where a recent landslide last Sunday completely blocked the road, leading to an 18 hour closure.  The CONAVI hopes the traveling public will understand it maybe necessary in order to prevent accidents and save lives.

Optional diversions can be taken through Route 10 between Cartago and Siquirres or via the Vara Blanca-Sarapiquí road to Heredia. 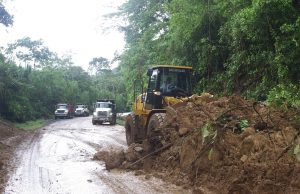 By far the most dangerous road in Costa Rica, Route 32, often described as the “Highway of Death”