I feel utterly sick to the stomach having to write this article about the now famous little dog called Duke.  For all the wrong reasons, this poor innocent chap must be top on the list as one of Costa Rica´s most famous dogs of the century, all thanks to the horrific abuse he received at the hands of a fellow human being.

The only good thing to come out of Duke´s barbaric attack by (some low-life) excuse of a man, is this shocking act of cruelty has sparked such an emotive response from the public, whose unity has at last been acknowledged by President Luis Guillermo Solís.

With a heavy heart, Duke´s case is not an isolated incident with many more pathetically abused animals reported almost daily, if not weekly, where as it stands right now Costa Rica regretfully has no laws in place to bring justice to these poor and defenseless creatures.

People DO care!  Duke in safe hands with the vet. 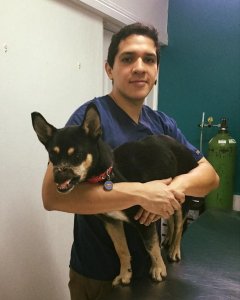 Just to summarize on Duke´s story.  Earlier this month, the two year old street dog was rushed into surgery after being attacked by a machete, which sliced through his upper jaw, leaving it hanging on by a thread.

The charity Vida Animal Costa Rica became involved to raise funds for Dukes care, where thankfully he´s recovering well after he lost half his jaw, nose and most of his teeth.

However, the perpetrator has apparently been found, but because there is no legislation to prosecute, this monster walks free!

For some reason, Duke in particular has touched the hearts of the nation with the public outraged by the lack of laws to protect against the cruelty of animals.  At the moment, Costa Rica considers all abuse, whether it´s the harming or killing of animals, to be a minor offense, with a maximum fine of only ₡200,000 (about $370).

Few cases are ever actually brought to court and now there´s widespread criticism pointing at the government´s failure to pass the promised animal welfare bill, which has been stalled by the Assembly for months.

Just two new and recent cases of cruelty, the current Costa Rican laws do not protect. 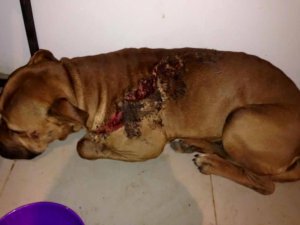 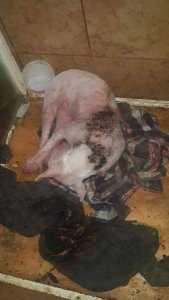 This desperately overdue bill would set prison sentences of between six months to three years, with monetary fines of up to $1,600.

The proposed bill also intends to penalize dog and cock fighting, but the opposition, mainly from the Libertarian Movement’s Otto Guevara have refused to negotiate, in the belief that the Tico´s traditions such as bull-fighting and horse parades would be jeopardized.

Feeling under pressure since Duke´s harrowing injuries caused such public outrage, Solís gave an official response last week in support of the bill, stating that his administration “has been consistent with its commitment to repudiate all kinds of animal abuse.”

Well not good enough Mr. President!  As the lawmakers have only returned after a mid-year vacation, with just two more weeks left of the current legislative session and the opposition filing 80 motions against the bill, when is the likes of Duke and all our abused animals ever going to be heard? 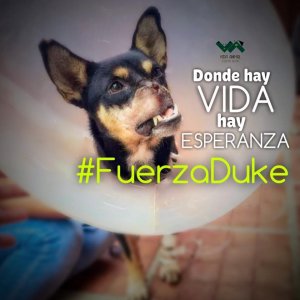 Campaigners are growing in numbers and thankfully Duke´s story is going to run and run, until something acceptable can be done by the government to bring about proper and justifiable sentences.

The Asociación Vida Animal Costa Rica, who made Duke´s story public on their facebook page, has given rise and momentum to the Marcha contra el Maltrato Animal en Costa Rica.

This organization came about due to the frustration from the public, who were tired of the animal abuse in Costa Rica where so many abysmal crimes committed went unpunished.

For six years now, they have struggled for the bill to criminalize animal cruelty and maltreatment, with a national crusade to defend the rights of all living creatures. 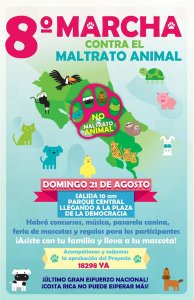 On Sunday, August 21st there is the Marcha contra el Maltrato Animal annual march from the Plaza de la Democracia in San José, which apparently is one of many across Costa Rica, to demand a referendum for a radical change to the existing, inadequate animal rights law.

Signatures and petitions, such as Fight for Stronger Animal Welfare Laws, have been growing by their thousands with so many people, partially thanks to Duke, now supporting this worthy cause.

Social media has gone into melt-down with posts of beloved pets supporting what is in essence, Duke´s plight, with the hashtag, #FuerzaDuke.

The animal rights law will change eventually, no matter the opposition, but how many more “Dukes” have to go through such vile abuse before Costa Rica stands proud and steps up to the plate in order to protect their innocent and beautiful creatures?

Thankfully Duke survived, but many do not and time is of the essence to stop this cruelty and say NO TO ANIMAL ABUSE once and for all!