As a recent car owner of a beloved shiny new car, and with a clean license of almost 30 years, I honestly thought I could handle the Costa Rica traffic and drivers with my considerable experience.  But Holy Moses, what have I let myself in for?  It´s like entering into a war zone around the San José area where I live, and pur-lease, the motorcyclists need to understand that life is short and to them, it´s going get even shorter the way they drive!  Left-side, right-side, and even towards on-coming traffic, they don´t seem to care, just so long as they get from A to B (good luck on that one), in record time.  Last week, I nearly killed one of them as I was indicating to turn left, where some “smart aleck” thought it was a great idea to over-take me just as I maneuvering into the side road.  All I can say is, it was a good job he sped off, otherwise I´d be in a Costa Rica jail by now, cited for G.B.H!

A law unto themselves, the joys of driving in San José Costa Rica! 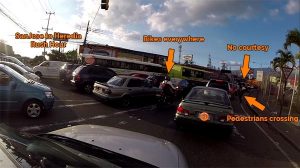 Anyway, gripe over (for now) and onto the recent report of the 2008 vehicle restriction in San José, implemented to reduce traffic, pollution and fuel consumption by Oscar Arias in his second term of office.  A report published by the Air Analysis Laboratory of the National University (UNA) last Friday, 3rd June, indicates that contamination rates have grown between 11 and 15% which implies that the eight years of control has achieved very little.

An appeal was filed by two deputies before the Constitutional Court in 2014, claiming that the restriction “violates the freedom of movement” but according to Mario Calderón, director of the Traffic Police, the results can not be entertained due to drivers not respecting the ban.  The case of appeal was rejected.

Recent reports from January to June 2016 state that 5,470 drivers have been fined for failing to comply with the “restrictio”.

On a personal note, I´d like to see a “restrictio” on ALL motorcyclists until they produce a certificate to confirm they have been schooled in the safely of driving a two-wheeled vehicle in Costa Rica, and failure to do so, will automatically have their vehicle confiscated forthwith!  Now that would soon sort out some of the congestion, save lives and the insurance costs of repairing a tidy dent to my poorly new car! 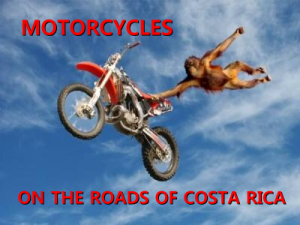