Costa Rica Remains Off The Danger List as the CDC Issues Travel Warnings for 22 Regions.

Where are the Affected Zones? 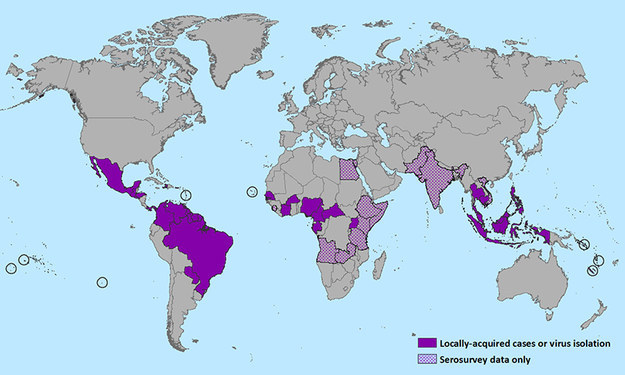 According to the most recent report from the CDC, the zika virus has shown up in 22 regions in South and Central America. There were 14 reported as of last week — Brazil, Colombia, El Salvador, French Guiana, Guatemala, Haiti, Honduras, Martinique, Mexico, Panama, Paraguay, Suriname, Venezuela, and Puerto Rico — as well as 8 new ones: Barbados, Bolivia, Ecuador, Guadeloupe, Saint Martin, Guyana, Cape Verde, and Samoa.

From a recent article on the 16th January 2016 by The Costa Rica Star, there have been no Zika Virus infections reported by the Ministerio de Salud, although Pura Vida Guide have yet to get a confirmed response to our own inquiry. It is understood that officials from Costa Rica are going to be one of the 11 Countries so far attending the Pan American Health Organization (PAHO) workshop on this dangerous virus held between February 2nd and 4th. Others expected to participate are officials from Bolivia, Colombia, Ecuador, El Salvador, Honduras, Guatemala, Mexico, Nicaragua, Panama and the Dominican Republic.

Encouragingly the Ministerio de Seguridad Pública (MSP) has stepped up its call for a “national mobilization” in order to contain the virus-carrying Aedes aegypi mosquito, responsible not only for the spread of Zika but also of dengue fever and Chikungunya.

It is widely recommended at this time to take extra precautions against mosquito bites, particularly during the day but also at night. However, as the spread of the virus has not been fully ascertained in recent cases and studies remain on-going, it is advisable during pregnancy and for those considering pregnancy to seek medical advice. At this time, no vaccine exists to prevent the Zika virus, so precautions are all the CDC, PAHO and WHO recommend on their official websites.

PURA VIDA GUIDE will keep our readers updated as news comes in, but for a brief understanding of the Zika Virus, please read below or go to the main health organization links:

What is the Zika Virus?

Zika fever is a mosquito-borne viral disease caused by Zika virus (ZIKV), consisting of mild fever, rash (mostly maculo-papular), headaches, arthralgia, myalgia, asthenia, and non-purulent conjunctivitis, occurring about two to seven days after the mosquito vector bite. One out of four people may develop symptoms, but in those who are affected the disease is usually mild with symptoms that can last between two and seven days. Its clinical manifestation is often similar to dengue, also a mosquito-borne illness.

Pregnancy and the Zika Virus: Recommendations for Pregnant Women Considering Travel to an Area of Zika Virus Transmission

On Friday, the U.S. Centers for Disease Control and Prevention said that pregnant women should postpone travel to 22 regions in South and Central America because of the risk of contracting the Zika virus.
That’s up from 14 regions that were on the warning list one week ago.

Transmitted by mosquitos, Zika causes fairly mild symptoms in adults, but has been linked to microcephaly, or an abnormally small head, in thousands of babies. The mosquitos that spread Zika “are aggressive daytime biters, prefer to bite people, and live indoors and outdoors near people,” the agency said.

Now, officials in four Latin American and Caribbean nations have warned women “to avoid getting pregnant entirely while the virus remains a problem”, the BBC reported. Colombia’s Health Minister Alejandro Gaviria urged women to delay getting pregnant for at least the next eight months. “We are doing this because I believe it’s a good way to communicate the risk, to tell people that there could be serious consequences,” he said. Similar warnings were issued in Ecuador, El Salvador and Jamaica.

Also new this week: The CDC reported that some people with Zika in French Polynesia and Brazil also had Guillain-Barré syndrome, a rare autoimmune disorder that can lead to paralysis. Hundreds of cases of the syndrome have been reported in Brazil, which is “higher than usual.” No one understands why the two conditions may be linked.
Last week, the CDC reported that its scientists had analyzed samples from two babies who had died in Brazil shortly after birth, both of whom had microcephaly, as well as from two pregnancies that ended in miscarriage. The scientists found the Zika virus in all four cases, and in the brains of the two full-term babies. All four mothers had had Zika-like symptoms during their pregnancies.

The most common symptoms of Zika are fever, rash, joint pain, or conjunctivitis (red eyes). Other common symptoms include muscle pain and headache. The incubation period (the time from exposure to symptoms) for Zika virus disease is not known, but is likely to be a few days to a week.

The illness is usually mild with symptoms lasting for several days to a week. Zika virus usually remains in the blood of an infected person for a few days but it can be found longer in some people.

The symptoms of Zika are similar to those of dengue and chikungunya, diseases spread through the same mosquitoes that transmit Zika.

See your healthcare provider if you develop the symptoms described above and have visited an area where Zika is found.

No vaccine or medications are available to prevent or treat Zika infections.

If anyone has experienced or been infected by the Zika Virus, please write to us with your story. We will pass any relevant information onto the Minsterio de Seguridad de Pública and Ministerio de Salud with a report back of any response received by these Governing bodies of Costa Rica.