Whilst Costa Rica prepared for a 3-day holiday weekend, last Friday at 3:42 pm, Costa Rica´s most current active volcano, Turrialba, had yet another powerful eruption.

Observing the latest activity, the Observatory of Volcanology and Seismology of Costa Rica: OVSICORI, noted that to the right of the crater, which you can clearly see on the video, two new fumaroles or in layman’s terms, cracks or vents, have appeared.  From the powerful eruption, gases were forced out from the fumaroles which suggests that a new caldera or cauldron could form in the future.

According to the Geology Department, the Turrialba´s colossus has been unfolding over the last two years with the formation of a caldera and a beautiful, but very toxic turquoise lake developed inside the western crater.  Now the conditions appear to be perfect with the rainfall on the rise, where magma is shifting slowly, allowing for new structural changes.

Before watching the video, you can see the two fumaroles to the right of the eruption on the still photograph, taken at the time of the recent eruption last Friday (22nd July) at 3:42 in the afternoon. 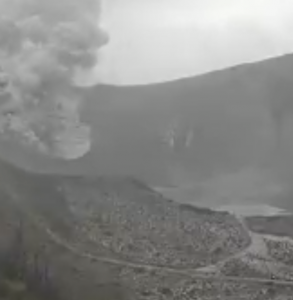 Please Save a Sloth in Costa Rica!