Now that’s FUNNY! “YOU” Can Now Give Parking Idiots a Ticket in Costa Rica!

“YOU” Can Now Give Parking Idiots a Ticket in Costa Rica!

How many times have you had to risk life or limb circulating some inconsiderate driver using the pavement to park his wretched car?  Or, in a mad rush to get to work on time, find some idiot has blocked the driveway by parking right across your gateway?

As it is, the side walks in San José barely service a single pedestrian, let alone two people walking together, with a daily assault course of potholes and broken paving to contend with.

So the urban development and public transportation advocacy organization #MovetePorTuCiudad, along with ChepeCletas and Costa Rica Limpia have come up with a brilliant idea and you´re going to love this one!  You can now award “Citizen Tickets”  to all those plonkers, who obviously think they own the rights to stick their beloved vehicle wherever they so choose, and be damned to the rest of us poor folks who have to navigate our way around their blessed piece of metal.

The tickets can be printed by clicking on here which translates to “You’ve won a #CitizenTicket for #BadParking.” This you then stick under the windshield wipers to let them know exactly what you think of their driving techniques and shame those inconsiderate so-and-so´s into hopefully thinking twice about where they park up the next time.

It may sound tame, considering what you´d probably be cussing at the time, but apparently it has worked in other cities around the world.  And although these tickets are fake and not legally binding, the recipient gets a little humiliation and perhaps a wee kick up the backside to think twice about others living in Costa Rica.

Think twice; It could be your grandmother, mother and baby or invalid friend trying to get by in Costa Rica 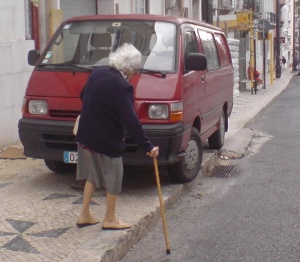 There´s also another growing media method, where fed-up pedestrians can now get their own back by posting on the likes of Facebook, using hashtags, #ParteCiudadano and #MalParqueado along with an accompanying photo of parking offenses, which apparently works a treat in publicly shamming individuals with far better results than any traffic warden; not that there´s many of those in Costa Rica.

This somewhat light-hearted campaign is growing rapidly in momentum with many offenders saying they´d prefer a parking fine to being named and shamed on social media networks……well suck it up you people (and you know who you are) or get your precious motor parked correctly the next time!

Honeymooning Lifeguard Saves Swimmer whilst on Holiday in Costa Rica