The croc victim identified as Arturo Jonathan Betker, a 50 year old man from Arizona, is reported to be in a critical condition since an attack by a crocodile on Tamarindo beach yesterday morning.

The beach, favored by surfers in the beautiful resort on the Pacific coast of Puntarenas, Costa Rica was fortunately inhabited with the early morning´s swimmers and beach dwellers, when the man was spotted, struggling to get out of the water.

His leg was seriously mangled by the attack and he had a nasty wound to his neck as he emerged out of the water, where several people rushed to his aide as he collapsed by the shore. 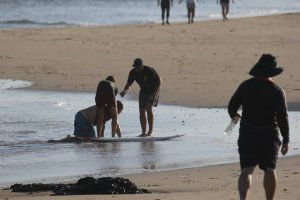 A surf photographer captured the images and posted them on Facebook, entitled Surf with Leo, showing the scene unfold as a lady and her friend rushed to assist the injured man.

Picking up on the story, Diana Zimmerman explains that she was on her way home after surfing further down the beach, when she spotted a friend cradling the mans head as he lay wounded.  In her statement she said, “My friend was with him during the attack. He left him with me and ran for help.”

Later that day, Zimmerman reported that she believes Mr. Betker is now in a stable condition at the hospital and his sons are on their way to Costa Rica to be with him as he recovers.

Many people rushed to help the injured man after the attack. 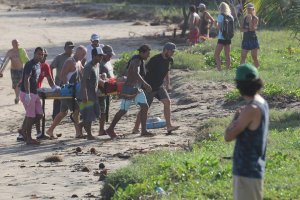 The U.S Embassy in Costa Rica have since confirmed they are aware of an American citizen having been attacked by a crocodile and intend to fully assist the family as they do with all overseas injuries, but declined to comment any further for privacy reasons.

Although crocodile attacks are extremely rare, there are some concerns about the public feeding the beasts which are making them less afraid of humans.  There´s apparently been an increase of the male species in recent years around the Pacific beaches in Costa Rica, who are venturing further away from their natural habitat in search of food. 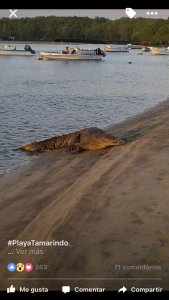