News just in from the Agriculture Vice Minister Felipe Arguedas Gamboa, regarding the consumption of vegetables grown north of Cartago province.  According to the Costa Rican government, they do not pose any risk to humans despite their exposure to ashes from the Turrialba Volcano.

Experts from the University of Costa Rica have, in recent weeks, been analyzing the regions farming productions, which primarily grow the country´s supply of potatoes and onions and so far, have ruled out the presence of toxic heavy metals in the ash. There are also hundreds of other farmers in the Cartago region who grow carrots, beets, cabbages, yucca, flowers and other crops with some 55 percent of ash fallen around the area and beyond.   However the public have been strongly recommended to wash all vegetables thoroughly in fresh, running water, but otherwise they are safe to eat. 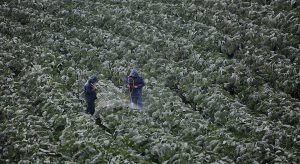 Current activity at the volcano, located 60 kilometers northeast of San José, consists mostly of moderate intensity tremors and a plume of vapor and gases, visible above the crater, the RSN reported.

For further information and advice on your health after the Turrialba Volcano´s eruption, go to IVHHN