Thanks to the efforts of animals rights groups and the new set of SENASA breeding regulations, the first of many “Puppy Mills” in Costa Rica was shut down last week.  Officially, the law becomes absolute in a few days time when the decree publication is issued by the government newspaper, La Gaceta.

Regardless, after an official complaint was filed with the National Animal Health Service (SENASA) and with the new laws set into place, these extra powers allowed police to access the home of a puppy mill in Cartago.  The raid at the tiny house with only two small bedrooms and a cramped sitting room contained 18 French Poodles in wholly inadequate conditions.  Purely designed for a mass breeding program, the pups and their mothers were seized and taken to the Humanitarian Association for the Protection of Costa Rican Animals (AHPPA) where they are undergoing veterinary care and rehabilitation before being processed for adoption.

One of the 18 French Poodles seized from a puppy mill in Cartago treated for injuries from over-breeding.

(Courtesy of The Humane Society) 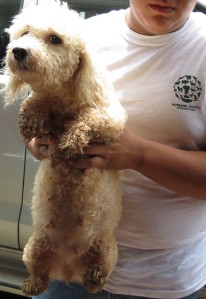 “People tend to only file complaints after they buy a dog from one of these facilities and it dies,” said Laura Loaiza, the director of SENASA’s animal welfare program. “Before this problem can get better we need to spread awareness and get people to report these facilities whenever they see them.”

Even though the new regulations have specific guidelines towards the appropriate care and welfare of animals, the government organization is still unable to act unless someone files an official complaint.  More importantly, the public needs to become more educated with the issues involved in buying cheap dogs as gifts.  Puppy mills will only exist if there is the demand where it´s imperative people understand that saving a few bucks to buy a breed only exasperates the growing problem.  And to collaborate with Loaiza in her statement, “puppy mills will always exist as long as there is a demand for cheap puppies. People need to be content with paying more to know that no dogs were mistreated.”

None-the-less, the long awaited new regulations is certainly a step in the right direction with the hope that one day Costa Rica can eliminate all puppy mills from existence. 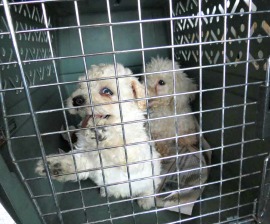