Costa Rica Celebrates the Rare Occasion: A Hand-Reared Sloth is Returned to the Wild.

Pura Vida Guide wishes to congratulate The Sloth Institute for this momentous and rare occasion in returning Monster back into the wild. This utterly heart-warming story is a credit to Co-founders, Sam Trull and Seda Sejud and their staff at TSI in Manuel Antonio, Costa Rica for the three years of dedication to bring about Monster´s release.

Few of us realize that the greatest threat to the Sloths is human kindness. Unknowingly we visit Sloth Sanctuaries in Costa Rica, unaware that the very handling of them is slowing killing these beautiful creatures. Which is why Pura Vida Guide supports The Sloth Institute for their ethos and protection of these charismatic animals, where this non-profit organization´s sole aim is to nurture and hand-raise Sloths to be returned to the rainforest.

The Sloth Institute is not a sanctuary and their orphaned Sloths are unavailable for public viewing, with the absolute necessity they are kept away from human contact in order to stand any chance of survival.

But back to this amazing story…..Monster arrived at the KSTR (Kids Saving The Rainforest) when she was less than two weeks old in December 2013. As it is, the three toed sloths barely ever survive in captivity, so just keeping this newborn alive for her to be moved to the Institute was a near-impossible task. So a baby so small like little Monster, had next to no chance, and each day was the expectation it was going to be her last.

Day and night, the team worked around the clock with so many dark days of uncertainty, and then there was the unspoken question; that were Monster to live, would she ever be able to survive in the wild or even, would she ever want to be free ?

Well, three years later Monster most certainly did and is! Sam Trull tells the story.  “We have been preparing for this moment her entire life,” and in June this year, Monster was set FREE!

Monster leaving her cage for the final time. 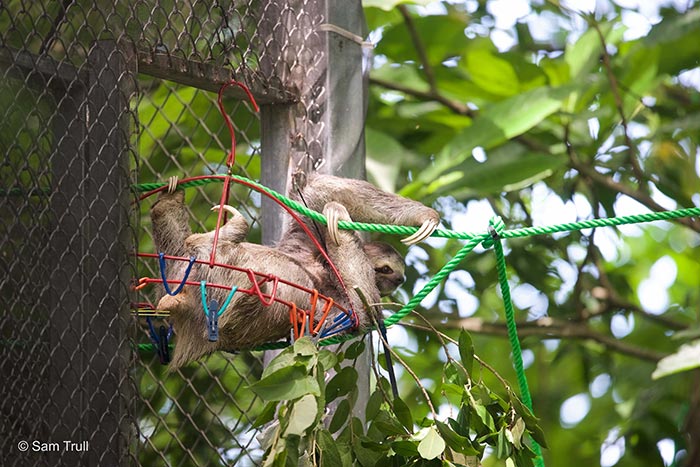 In her formative years, Monster has learned everything from climbing, hiding, foraging, sunning, socializing and as she left her cage for the final time, the overwhelming emotions of the team, can only be described as euphoric. Not ever though will they lose touch with their prodigy, with literally watching Monster 24/7 while she wears a VHF collar, so her every movement can be tracked.

So far, it looks like Monster is a natural and although no one can predict here future, for an absolute certainty, this beautiful sloth is finally happy in the habitat she was born to. So, good luck little Monster and please, for the team at The Sloth Institute and all of us, live a long and joyous life and maybe, just maybe, you´ll have babies of your one one day?

Monster dinning out in the wild 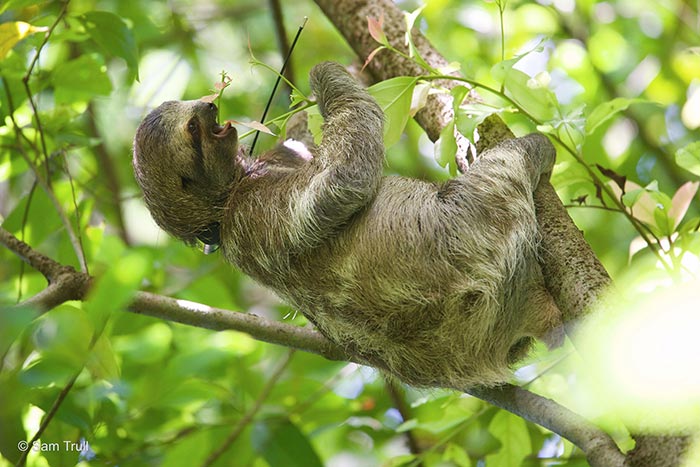 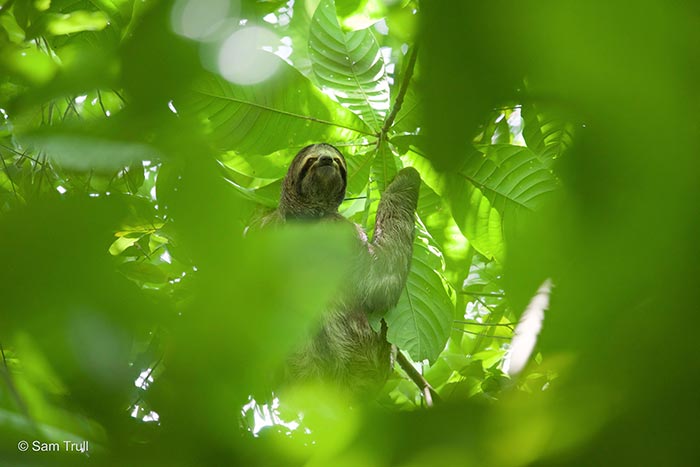