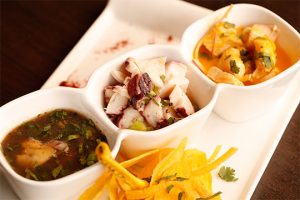 Just over a week ago, the Grand Final of Cost Rica´s first ever Ceviche Tour Final took place in Torre Lexix, Avenida Escazú, San José.  The 16 participating restaurants from all over Costa Rica came together for a spectacular evening with plenty of wine flowing, music and most importantly, an array of beautifully presented Ceviche dishes for the invited guests to savor.

Throughout the night, the top competing chefs put on a first-class performance with awesome culinary skills, to demonstrate their own take on the classic Ceviche, all of which, had their own signature twist.  Every type of fish from mainstay to the exotic in tantalizing sauces were incorporated with sumptuous seafood, fruits, herbs and spices, presented in such art-form, the feast was beyond delicious!

The 16 restaurants and their Ceviche entry dishes can be viewed by linking to Pura Vida Guide´s blog: Ceviche Tour where each will remain on their menus for awhile to come, all of which are worthy winners and highly recommended to check out their venues:

AND THE WINNER IS…….

Naturally, there can be only one winner, but as a closely contested final, all chefs and their restaurants should be merited for the sublime cuisine put forward for the Ceviche Tour.  The three finalists were the La Isabela restaurant located in the hotel Costa Rica Marriott, Go Fish Seafood Co., and Vino Mundo.  However, it´s a huge congratulations to Go Fish Seafood Co, who won the trophy for their Ceviche “#TrioGoFish”.  The Ceviche Tour champion, head Chef, Alberto Cubero, put forward three small servings of piangua, sole and octopus which played on the taste-buds with such delicate flavors, all very different, yet complementing each other in a most ingenious way.

Let´s hope he and Go Fish return next year to contest their coveted title once again?  Also a huge congratulations to the 4dmentes for yet another incredibly successful competition, where we look forward to seeing what new, innovative idea the team come up with next! 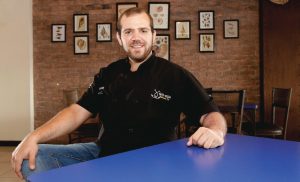