According to a recent report, Burger King has announced that it will return to Costa Rica this June 14th.  Is this really good news?  Yes, I have to concede it will provide jobs again for the 434 people who were left unemployed when Burger King closed its 29 outlets in October 2015, but as a staunch advocate against the fast food industry in general, I hope I am not the only one who considers this so-called “good news” with deep reservation?

As a Brit, I have watched over many years, the horrors of change in the high-streets, with almost every town and city taken over by one food giant or another.  McDonald’s, KFC, Pizza Hut, Wimpy and yes, Burger King.  And I´ll say it as it is, an obese epidemic of unhealthy British people now exist, waddling around the shops holding a tray of greasy offering, which personally, I wouldn´t feed my dog with.  In the other hand, a ridiculous size of fizzy stuff, so full of sugar, a whole army could march for a week on the white stuff!

Fast Food is a killer! 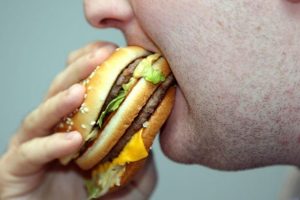 Don´t get me wrong, I believe in the expression, “a little of what you fancy, does you good”, but it has now become an undisputed fact, that the Western World is getting fatter and fatter by each generation with no-end of health problems, primarily, diabetes, mobility, respiratory and heart defects, to name but a few.

So call me old-fashioned if you like, but I´d love to turn back the clock to when I was growing up, where families would sit around the table together and eat home cooked food, bought fresh from the market and prepared from scratch.  And I´ll argue at every level, that it is by far, cheaper to nourish your children with wholesome food than any polystyrene box full of over-processed, congealed burger and fries, which to my mind is pure poison!

Do I then welcome the return of Burger King to Costa Rica?  No, no, no, I certainly do not!  For the full article about “The Kings” return, go to La Nacion

Or for better choices of eating out, go to Pura Vida Guide Restaurants and check out their menus.