Just before the weekend, Police Officers from the Border Patrol of Limón came across by chance, a young foal stuck in the muddy waters at the mouth of Agua Dulce, Colorado River, during a routine inspection for drugs and smugglers.  The precarious situation was made even more perilous with the lagoon´s inhabitants of crocodiles, some four to six meters long, who were circulating the drowning foal ready to feast on their prey.

At first, one officer recalled just hearing a “splash of someone or something” and took the decision to investigate further.  As they steered the motorboat closer, all they could see in the dark waters was a head of a horse and despite the risk, realized they had to act fast to save the young foal from a certain death.

Police Officer, Jiménez Joselyn described the plight of the desperate animal, “in his eyes was terror with several crocodiles approaching from not far away”.

MOMENTS FROM DEATH: POLICE OFFICERS WORKING AGAINST THE CLOCK IN LIMÓN 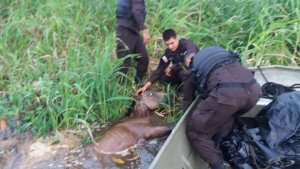 Knowing that time was the essence, the officers took 20 minutes of heavy maneuvering both from inside the boat and out in the murky waters to release the tangled body and limbs, before dragging the weary horse onto safe land.  For several minutes the foal lay gasping for breath before springing back onto its feet.  And with hearing a whinny call from its mother, took flight towards the beckoning sound, neighing and kicking his legs in freedom.  As he galloped towards his mother, this one lucky horse can live to tell the tale and all thanks to the brave officers of the Ministry of Public Security, who returned back to their usual evening patrol……..and as our hero´s of the hour! 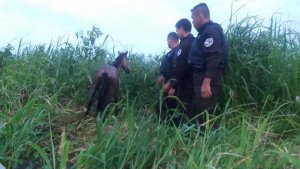