NEWS JUST IN: The Ministerio de Seguridad Pública have reported to have made 7 arrests at 6:40 am this morning with regards to the Taxis Drivers National Protest in Costa Rica today.

Security forces arrested four taxi drivers in La Hispanidad and three at Juan Santamaria, where one police officer, Erick Chaves Sibaja, has been wounded.  In the fracas, the PIU (Police Intervention Unit) officer was injured badly by a blows to the face and is now receiving medical attention.

Two vehicles have been seized with the 7 detainees now awaiting to be presented to the Public Prosecutor.

The authorities have reiterated a call for calm and will continue to monitor the situation throughout the day. 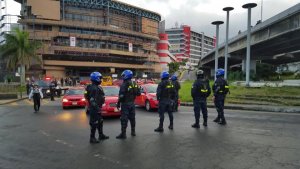