Down the Paseo Colón in San José, Costa Rica came together brandishing their colours of the rainbow flags to celebrate the diversity of mankind. Marcha de la Diversidad supported by the LGBT, activists of the lesbian, gay, bisexual and transgender community, have much to feel proud about since the passing of anti-discrimination and the extension of healthcare benefits to same-sex partners in Costa Rica.

In just over a week after President Luis Guillermo Solís took office, he made history for the first Costa Rican leader to raise the rainbow flag in honor of the International Day Against Homophobia and Transphobia, May 17 2014. In his statement during the event, he made clear Costa Rica will move forward in the human rights for all, “This is the house of all Costa Ricans. When we say all Costa Ricans we mean all, without exclusion, without violence, without harassment in absolute respect for the rights of each one.” Adding that discrimination based on sexual orientation was against the letter and spirit of the Costa Rican Constitution, he concluded, “We’re fighting against discrimination in defense of the human rights of all Costa Ricans.”

But still much work has yet to be accomplished and many feel the movement has somewhat stagnated with the delays to legalize same-sex marriage. A bill of legislation was introduced last year, but has been stalled by the Legislative Assembly.

None-the-less, it was a joyous, colorful and peaceful march through the Costa Rican capital, with the coming together of all creeds and diversities, uniting together in a single voice, for the equality of mankind. 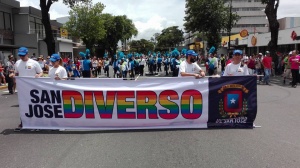